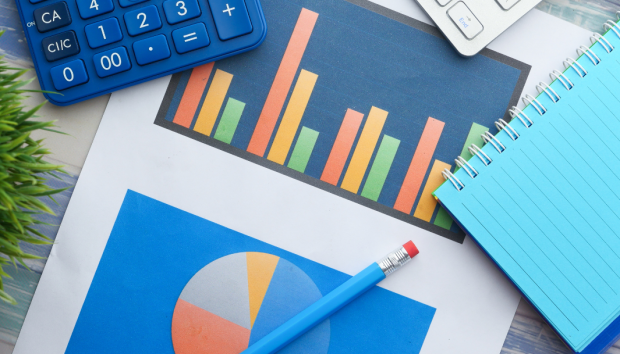 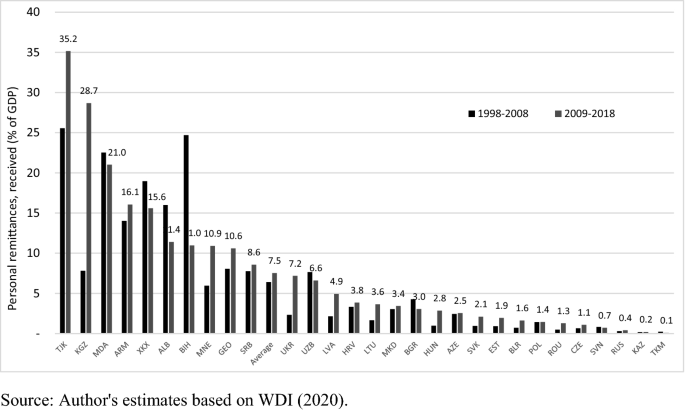 Personal remittances received as a share of GDP in the CEE/FSU (%)
Full size image
On the global scale as of mid 2020, remittances were expected to drop by 20% compared to the previous year with a disproportionate detrimental impact on the least-developed economies (World Bank 2020). From a macroeconomic perspective, it may be argued that reliance on remittances can erode the competitiveness of the domestic labor market. Steady unconditional financial inflows boosting consumers’ higher purchasing power may easily outweigh the incentives to compete for jobs in the local economies (e.g., Chami et al. 2008). Furthermore, Chami et al. (2018) argue that evidence of remittances’ contribution to small economies’ growth is lacking. Elsewhere, Nissanke (2019), in a recent analysis of structural transformations of small economies in sub-Saharan Africa, argues that diasporas are active participants in development finance. The premise is that diaspora’s first movers are ready take currency or other country risks leading the global investors to the home economy. A steady inflow of remittances may be seen as potentially ushering such tidal change in development finance.
As a high-level take, we construct a diaspora dependent indicator for external financial inflows in a cross-country comparison for CEE/FSU. Figure 2 compares the country’s sum of foreign direct investment (FDI) and remittance inflows per capita to the gross domestic product (GDP) per capita between 2000 and 2018. The results in Fig. 2 show some countries with relatively modest post-transition recovery in GDP per capita but with high inflows of combined external investments (e.g., Croatia, Hungary, and combined Serbia and Montenegro). There are also those with strong per capita income growth but relatively weak external inflows. For the top performers, FDI flows play a much greater role than remittances. To some extent, this observation is also consistent with the fact that countries with smaller income gains (bottom left from the average point) have smaller per capita inflows.
Fig. 2 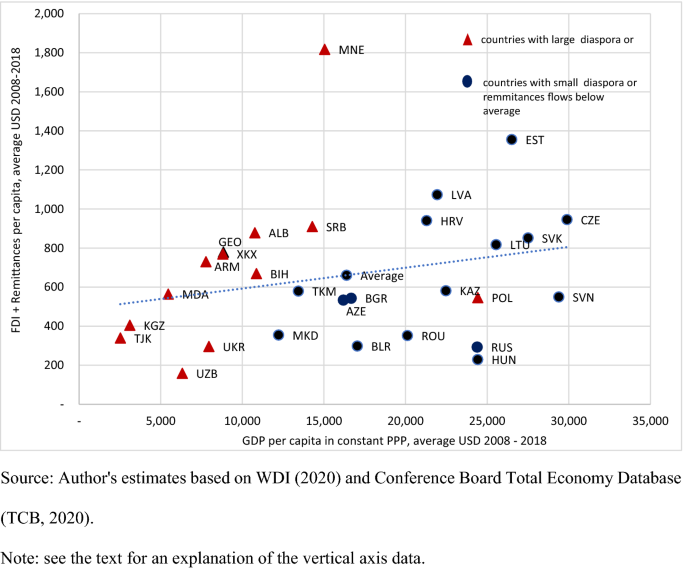 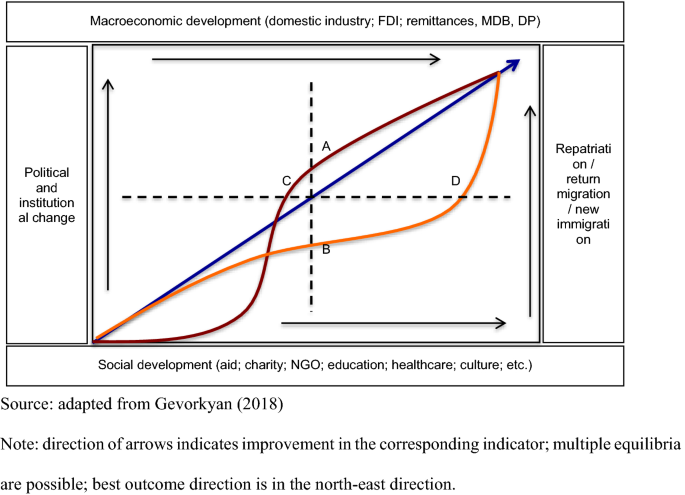 A diaspora driven small country economic development model
Full size image
The top horizontal axis measures business and economic development. This first factor accounts for including industrial structure, FDI, and remittance flows, accounting for the diaspora’s entrepreneurial contribution to the country’s industrial policy. Note that the MDB and DP play a role in facilitating strong improvement in this factor. The second factor, at the bottom horizontal axis, measures broad socioeconomic development, including a range of “soft” development categories that are often critical in macroeconomic growth. The left-hand vertical axis measures political and institutional change. The right-hand vertical axis measures the gains from migration. This fourth factor accounts for repatriation and return labor migration. However, the migration index should also capture the actual process of immigration, which would be strongly applicable in the cases of the “old” diaspora. Recall, that for this group, the ancestral country may not have been the actual birthplace for neither the “repatriate” nor their parents. In this case, what often is termed as repatriation, diaspora’s return to the ancestral homeland, is more properly defined as immigration. Hence, the immigrant shock of adjustment in a new place may be stronger than in the case of returning temporary labor migrants.
We focus on two scenarios, illustrated by the two curves deviating from the diagonal in Fig. 3, which represents perfectly equal distribution among all four factors. Over time, the deviations occur for many reasons, including the lack of unity across the diaspora (i.e., dispersion) and lack of systemic engagement infrastructure at home. The connection may be sustained by the diaspora’s latent potential as suggested by the ADOS. For example, the points labeled A and B both represent equal improvement in social, business, and economic involvement but vary significantly on the extent of the diaspora’s political involvement in the home country and degree of repatriation (or physical connection). Similarly, points C and D show the same levels of institutional change and repatriation, though with the opposite level of involvement in the economic structure and social development. Scenarios to represent specific countries could be elaborated.
The current scenarios in Fig. 3 encompass concerns that are immediate and challenging to address through economic theorizing—the role of geography, legacy institutions, and predominant economic structures [e.g., see analysis of small open Caribbean economies by Constantine and Khemraj (2019)]. Those are critical to development success in the small CEE/FSU economies. Many of these countries are either landlocked or distanced from global trade routes and face massive geopolitical risks that also shape domestic institutions. As such, it is tempting to view the diaspora as a possible, yet vaguely defined, push factor in national development models.
As far as the potential scenarios, the model in Fig. 3 is anchored by the common good theme of this paper. The four-dimensional view of the model points to some tangible measurements leveraging diaspora’s effectiveness in development. Harnessing this potential also identifies a clear need for a unifying agent in the diaspora-homeland engagement process. Jointly with diaspora portal and similar mechanisms, the central guiding role may be relegated to a dedicated semi-autonomous agency within the formal governmental structure. The agency can be designed to withstand political cycles maintaining operational capacity despite temporary policy changes while remaining focused on key country specific development issues. Overcoming the dispersion effect, leveraging such transparent engagement infrastructure, diasporas then are able to introduce positive systemic change in their home countries’ development process on a wide scale, ranging from social aspects to industrial policy questions. For a small country in a competitive global economy, capitalizing on the diaspora capacity in a common good framework becomes an essential development milestone.
Conclusion
Indeed, the diaspora for development potential has far-reaching and positive promise. Diaspora is seen as an especially critical agent of development following the 2020 pandemic-induced global crisis. Yet, the lack of engagement infrastructure for the diaspora and limited realistic assessments of the said potential stand in sharp contrast to the hypothetical impact based on individual case studies. The problem of diasporization, by which structural voids are hoped to be filled by the diaspora, emerges as central to understanding diaspora’s motivations for home country engagement, as individual gains are contrasted to the common good outcomes.
This paper argues that the modalities of diaspora involvement with the ancestral home and the deterrence factors to that are significantly more complex and diverse than previously assumed. The lessons from the survey presented in this paper may be relevant across small economies in emphasizing the heterogeneity of the dispersion with consequences for macroeconomic and social development. From the diaspora’s perspective, the connection with the home country is often a function of the generational distance and complexity of the socio-economic interactions. From the home country’s perspective, the connection with its diaspora requires consistency and appreciation of diaspora’s significance in a more systemic development view.
The model derived in this analysis offers some measurable aspects of diaspora’s broader role in economic development. The institutional instruments discussed in the paper and those that are yet to emerge enter into the model as key components revealing diaspora’s true potential in the home economy converting isolated trends in a more systemic and impactful collective effort. Still, conceptual and empirical representations notwithstanding, at a more philosophical level, it is out of a difficult balance of diverse circumstances that the two communities—the home country and its diaspora—may build effective engagement infrastructure connecting with each other.