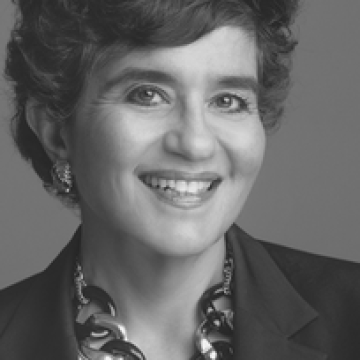 Edele Hovnanian
Chairman of the Board of Trustees
Edele Hovnanian holds an M.B.A. from Columbia University, and joint B.S. degrees in Finance and Civil Engineering from the University of Pennsylvania. However, it was her study abroad program at the University of Yerevan from 1982-1983 that proved to be the educational experience that was the most life changing for her. She resides in New Jersey, USA.

Edele  runs her family’s enterprises which include  managing a multi-million square foot portfolio of commercial properties, a number of operating companies, and a half a billion dollar portfolio of investments.  She has worked in the family business since 1986 and took over the leadership of all the family’s for profit and non-profit activities in 2005.  The non-profit ventures and investments  are run through the H. Hovnanian Family Foundation and include a number of  NGOs fully funded by the foundation, including Birthright Armenia,  Armenian Volunteer Corps, HIKEArmenia, and HIVE Fund, all programs initiated and overseen by Edele herself.

She is currently transitioning to pass on the torch of the family business to the third generation, led by Gorr Sahakian, her oldest nephew, allowing Edele to soon be devoting full time to philanthropy. She is fully committed to making the country of Armenia  rise to its fullest potential and believes that the REPAT program can play a critical and important role in achieving that vision.
Share with your friends