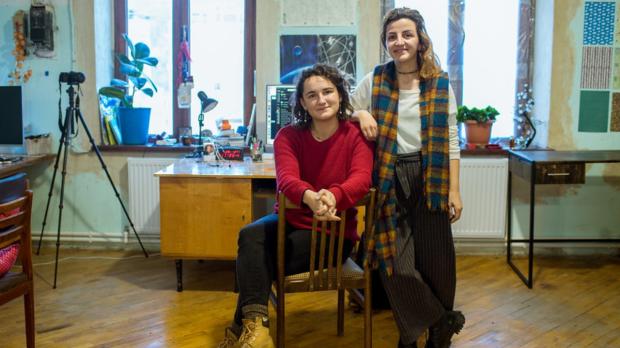 This interview is conducted with Sashka Avanyan and Lusine Poghosyan, the founders of Creopia.  A social business based in Vanadzor, that creates Visuals for good-impact entrepreneurs and provides video editing, animation, and graphic design services to like-minded initiators of social change.
Sashka, you are a multinational person born in the USA, raised in Russia, studied in Canada and repatriated to Armenia. Can you tell us about your journey and why you chose to live in Vanadzor?
- My experience was very positive from the beginning, though I haven’t been connected to my Armenian routes. I came through the Birthright Armenia program. My job placement was in Vanadzor. I was supposed to stay 3 months, then it turned into five. Then I stayed much longer than I anticipated. My integration process was easier than people who have Western-Armenian backgrounds. The knowledge of the Russian language benefited me. The timing was also important to me. I was in the right place at the right time. I was tired of the Western countries and from the moment I relocated to Vanadzor, it captivated me.
It was love at first sight. A lot of creativity opened up. Then, I decided to move for the summer, and at the same time, I got a job offer to open a call center for an American company in Vanadzor, but I knew it wasn’t a job that I was going to do my whole life. There was much more that could be done in Vanadzor. While I was working in the call center, I met Lusine, who moved back to Vanadzor from Italy after finishing her Master’s degree. Lusine was also looking for an opportunity to stay in Vanadzor. Our paths crossed and we both had the motive to start what we believe in. That's how Creopia was founded. For three years we have been working on Creapia and thinking about what we can turn it into. There was a time we put it on hold when COVID-19 hit. 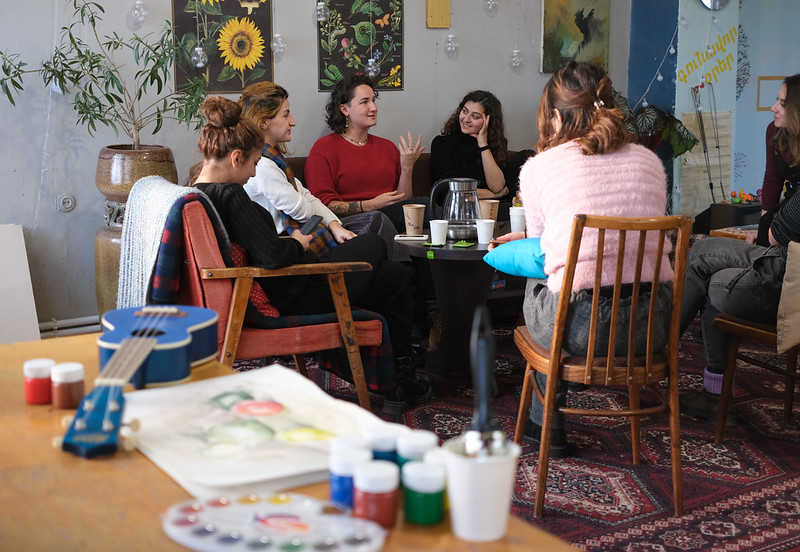 The reason why my partnership works with Lusine is that we both are attached to Vanadzor from different perspectives.

- For me, it  is the new western and fresh perspective that is exciting about all the potential in this city and for Lusine it is the childhood memories, the admiration and love of the city. More important for both of us is creating a space where we can maintain the young talents in Vanadzor and endure their bonds to their city.

Lusine, can you tell us about yourself, your background, and your involvement with Creopia?

- I was born, raised and spent most of my life in Vanadzor. Here, I have  many memories. It is the city that I love. While the majority went to work and study in Yerevan, I decided to stay in Vanadzor. The only time I left was for my Master’s degree. It was in Peace Studies; I went to Italy and came back. As for my professional background, I am in the peacebuilding and conflict resolution field. I have 10 years of experience. I am also an art enthusiast.

When I met with Sashka, we both wanted to do a unique project that connects us more to Vanadzor. Sashka had the idea of establishing a video editing office, and wanted to enroll me. I was into the idea and we discussed it. I suggested having a project where we can include visual arts along with video editing and have a social impact on Vanadzor. The further we discussed the more we developed and shaped the concept of Creopia. We wanted to generate a positive change in the Vanadzor community and its surroundings. Vanadzor has unique talents that must be addressed to and Creopia is the facilitator for these young talents to shine. 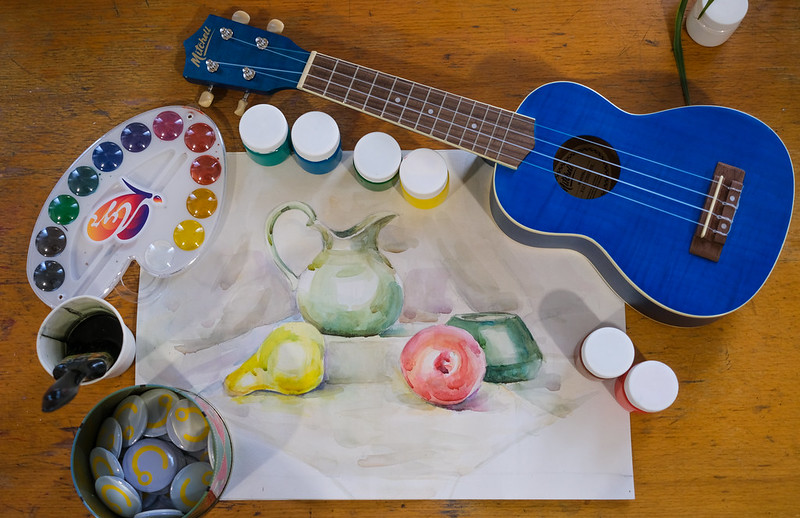 Sashka and Lusine, tell us more about Creopia and the workshops.

- The name Creopia comes from creation and Opia. Opia means the connection that you make or have when you look into someone’s eyes and you feel vulnerable. The message that we want to deliver to people is that any project that Creopia does is looking the subject directly in the eye in a creative way.

From the beginning, establishing Creopia was very exciting to us especially because two women are behind this initiative. Creopia generates a feminine energy that can overcome any oppression spread in the city.

The beginning period of Creopia was focused on applying for grants and our personal identity hadn't been developed yet. We worked on small projects such as movie screenings and preparing a video editing training program for students in collaboration with the Vanadzor Technology Center (VTC) with social issues in mind. When the  COVID-19 hit, the program was shut down. Creopia hasn’t been dead but hasn’t arrived either as we planned ahead.

After two years of working slowly, we won an online competition within a framework of the MOCI project that we worked on with the other South-Caucasian countries after participating in the Civil Match forum.

In August 2021 we started actively working, running “Arts for Social Change '' workshops such as  drawing on bags around the theme of non-violence and identifying violence in society and designing stickers for raising awareness on animal violence.  The targeted groups for these workshops and training sessions were youth from Amrakits, Margahovit, Spitak, and Vanadzor. 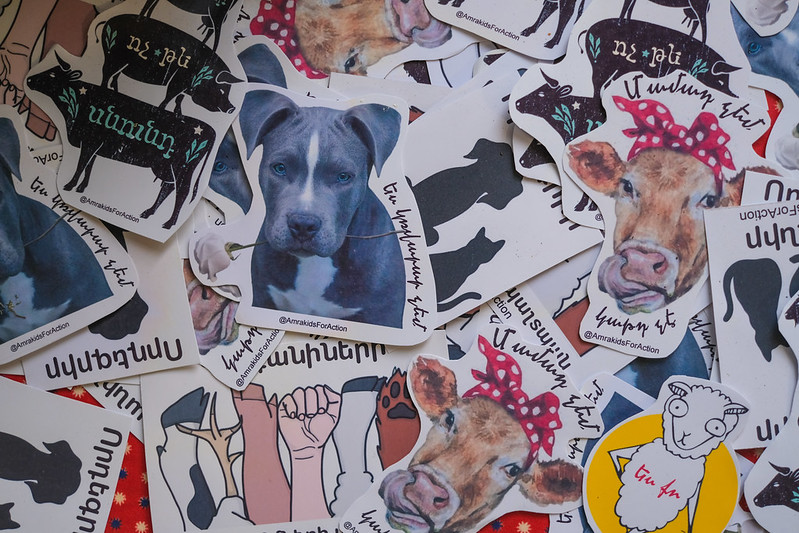 Our students attend our training sessions that are based on projects. We don’t have a specific curriculum. For example, currently, they are working on Creopia’s vlog, an explainer animation of what Creopia does and working on a movie project A-Z  in Vanadzor which is a highlight video about life in Vanadzor.

What will be your message to the Diasporan Armenians who want to move to Armenia?

Lusine: If you have a dream and you know this dream can be implemented in Armenia then you have to make your move but keep in mind that it should be connecting you to Armenia otherwise if it is only an investment that doesn’t cause any attachment to Armenia then it wouldn’t be the right option for you to take your step.

Sashka: For me what helped was moving to Armenia and actually living here. Also, the integration process played a huge role in me wanting to stay in Armenia and especially in Vanadzor. If you are still living abroad and trying to figure out what you will do then the repatriation idea will stay a thought. You should take the leap and experience Armenia. You should also be patient. I have been living in Vanadzor for five years and started Creopia three years ago. I know people who have families and kids aren’t in a situation where they can take all the risks but if your situation is like mine then you should take the advantage of it. Your twenties is the best period to discover what Armenia can offer you, especially the regions. There is a lot of potential not only in Vanadzor but also Gyumri and the surrounding regions. You just need to be more open to try and go deep to find out where these talents are hidden and what can be done for your homeland and yourself.